« on January 15th, 05:49 PM »Last edited on January 15th, 05:52 PM
There's a method to change/add map marks, radardisc, radar map and menu map, but there's not a way to change radar centre blip and player's weapon images. Would be cool and util add it before the 0.4.7 update.

For who not understand what I mean by radar centre blip:

Second suggestion is supposed to add pink arrow:
It would be interessant to see some day. 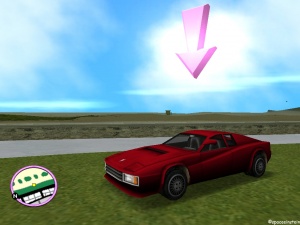 Idea is a great. That pink arrow would remind us about the offline version of vice city. ❤

I remember when I played the game in 2003 my geforce 440mx couldnt render the arrow effect properly ;D
1

however if possible, im not against it.
1

Hmm, well if you change a server radar to HD one would be weird because is not possible to change radar centre blip.

About 2nd suggestion, it can be util for tutorials, events, It'll make servers more better and beautiful.

there's word around this summer devs may come back and deal with all issues, but that depends only if they have time...

this word is around for years.
3
I am gamer, programmer and hacker. Try to find me!
xD

« Reply #12, on January 20th, 11:04 AM »
Sadly, as staff has been saying it since ever, devs are not paid to do anything.
It's their hobby, so they also have their personal lives to take care of, which eats all the time.
Yeah, nothing new here, everybody knows it. It happens to all of us.

But it is hard to keep up with the development since we mostly had active just 1 developer per time, maximum 2, in the past decade.
VC:MP development has been abandoned numerous times, and everybody (myself included) claimed that it will die.
Still, here we are, after all of this years, with the mod updated and players on.

As much as people want developers to do this, and that, and as soon as possible, it will bring no good if you start blaming them.  (not the case here, but you got the point)
In fact, it will make things worse. Imagine you are working on something for free, in your very free-time, and then users start complaining about it. Would you still continue to do it ?

Another problem was that everytime a new developer came in, the other developers where already out, so nobody to ask how the code works.
So every active developer had to mostly start learning and get used to the code first, in order to be able to do something. And that takes time indeed.

0.4.7 was very very bugged. Initially, instead of releasing the last 006 update, we wanted to work on the 0.4.7 to make it work and get things done like we said, but that version was having a rewritten player&vehicle sync which brought a lot of leaks and problems. Tried to fix things up, but without Stormeus' help (since he was the one who worked on it), a lot of things were confusing there, and hard to repair.
So, we discussed and decided:

While this is NOT the 0.4.7 update it does include a lot of the quality-of-life improvements (and more!) from 0.4.7 all while still being backward compatible with current 0.4.6 servers!

Better to work on the stable 006 we had, so we can have an even better base ( actual version - most stable vcmp version so far ) for the 0.4.7 when development will start again.

PS: Some videos I've done while trying to find the leaks and bugs in 0.4.7

and then again who wants to be paid money for developing  vcmp? they say money can't buy everything, so... at least it's a clean work..
« WebNet-Official Hosting
Evolution A/D League invitation »