Register for staff position through the link attached:

Good luck with the project!!
3

Credit to Gohan. for image
What is MAGNA?
A heartwarming greet to everyone in the community. Today is a very important day for VC-AD and VC: MP itself: out of the effort of our very collaborative staff, in an attempt to bring some cooperative fun into the game through a new, sophisticated, and breaking event. Today, the VCAD Magna Tournament is being presented. This is a new event that will occur once a year, the schedulement is designed for a short span of time, based upon super random, mixed teams led by experienced captains and players chosen through auction, that will try to conquer the trophy fighting on VCAD.

How can you participate, any limit?
The applications for players that are interested in being taken into account for this event will be opened soon. Currently, the organization of the event aims for 56 participants, scheduled and divided thereupon within 8 teams. Those applicants who came up a bit late will be able to apply for the event though they are going to stand on a reserve pool - so show up early!
Once applications are closed, accepted applicants will be categorized under the three following tiers:

Pro: Those players that are considered very skillful based upon factual evidence of their experience, years in the game, development through past events and won competitions.

Average: Those players that maintain a regular skillful demonstration when needed, have a considerable time playing the game, may from time to time have good performances in events and be noticeable in servers.

Each team will have the same number of players from each tier after the bidding is done.

How to be a captain?
Captains are expected to apply early. The main considerations for a Captain to be chosen, are the historical development and the ability of the player, i.e. overall history, experience, management of groups, and leadership. However, considering there are only eight groups, you should not feel down if you are not picked up. Though we encourage you to throw your application here if you feel that you have enough conditions. Captains applications are to be opened at the same time as Players' applications, though Captains are to be dealt with in the first place in order for them to decide their team name and have everything ready before the auction. Captains are expected to maintain a full activity and responsibility for their team throughout the whole tournament - so this is a 'no' if you are not going to be active and considering to apply. Vice Captains will also be taken and announced before the matches.

In which teams we will play and what is the Auction?
A discord bot will be set up on Magna’s auction channel where the auction will take place. A specific day will be designated where captains have to show up so they can place their bid on players and teams can be sorted. 200$ will be given to every captain. The money has to be used wisely and bid set on their favorite players or best options. After the bid is complete, teams will be determined and players will have to play in their respective teams. If some player refuses to play in the assigned team, a ban from the event will be issued (considering that we have explained the rules beforehand!).

« Reply #5, on November 12th, 2021, 04:47 PM »
The highly awaited time is here. We are opening our gates to the community on this day so everyone get a chance to be a part of MAGNA’21. Gear up because you are about to experience a gigantic battle.

We’ve opened both Captain and Player Applications, hurry up as we’ve set a limit this time. Apply now to be a MAGNATE.

« Reply #6, on November 13th, 2021, 05:21 PM »
A little information regarding base system and event format is now available. If you want to comprehend the working of the event and how bases will be chosen, you may read the topic:

We will be releasing videos for both very soon in order for you to have a complete understanding.
2

« Reply #7, on November 15th, 2021, 09:15 AM »
Our video and publication team have been working day and night to bring this to you and make things easier to understand for every MAGNA Participant.

Here is the video guide which explains the working of event in more detail:

Applications are closing very soon as we are nearly touching 50 participants out of 56. Hurry!
2

« Reply #8, on November 16th, 2021, 04:59 PM »
This time we are aiming for 56 participants and no participants will be accepted after that. We’ve just 4 spots left so hurry up if you were planning to apply. After we’ve attained our limit, all the future applicants will be put into reserve pool who can be replaced if someone from the accepted people withdraw.

Reserve applicants will be given place based on the tier someone withdraw.
1

« Reply #9, on November 18th, 2021, 11:42 AM »
We’ve been planning to stick with deadline but due to huge demand from players regarding auction ceremony to be held as soon as possible. We are compelled to shorten the deadline for CAPTAIN Applications.

Applications for captains will be closed on 20th November so we can start preparations for the auction asap. Candidates who were planning to lead a team are encouraged to make an application before the deadline.

With that said, just one slot left for the player applications. HURRY!

« Reply #10, on November 19th, 2021, 07:09 AM »
As we’ve attained our desired number of participants, we are closing our player applications today and opening reserve pool. We thank you everyone for the overwhelming response, it wouldn’t have been possible without your support and it shows your love towards VCAD and MAGNA.

All the future applicants will be put into the reserve pool. We encourage you to apply if you still wish to participate in the coming days in case someone withdraws. We plan to start with event as soon as we can but meanwhile we expect patience and your support.

Thank you for reading.
1

« Reply #11, on November 20th, 2021, 08:59 PM »
Captain Applications are closed now. We’ve successfully attained our eight captains who will lead teams throughout this tournament. Congratulations for being a MAGNA Captain as you will experience more competitive and exciting stuff. With you being accepted today, you’ve to carry a huge responsibility throughout the tournament.

Along with that, we are progressing towards auction ceremony very soon so stay tuned.

« Reply #12, on November 21st, 2021, 10:08 AM »
Auction System working has been explained for every participants in the following topic. If you still have any doubts, feel free to ask in General Discussion Board.

« Reply #13, on November 22nd, 2021, 06:18 PM »
We are officially releasing our podcast series from today. Here is a little teaser by our very own podcast team reflecting on what it is all about.

So stay tuned as we will be releasing first official episode of podcast very soon.

« Reply #14, on November 23rd, 2021, 02:18 PM »
We’d like to give heartwarming welcome to every player who has been taken as participant in MAGNA. Today, we're announcing something that every and each of you have been expecting for a long while: The final AUCTION ceremony. In this aforementioned ceremony, each player will get to know which one will be the respective team they will be playing with, and among their teammates, they are going to try to achieve the victory. 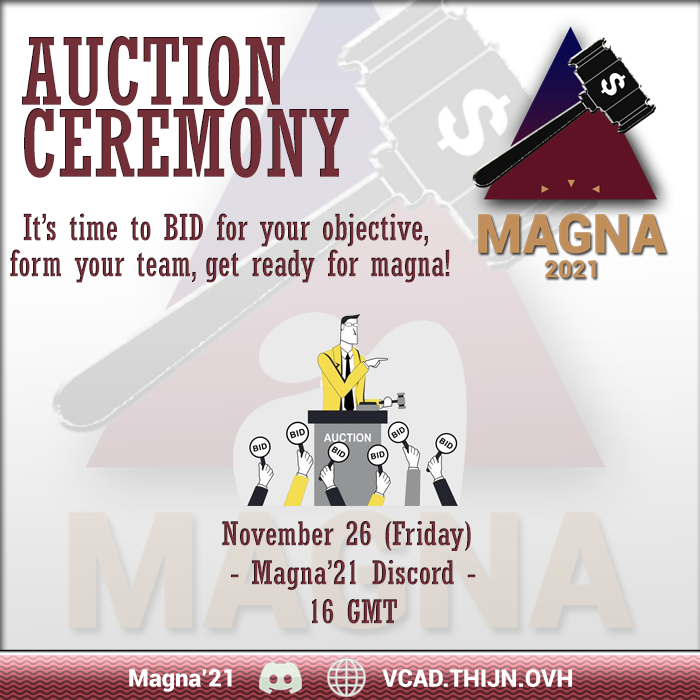